ONA Salmon Feast a hit with students from around the world 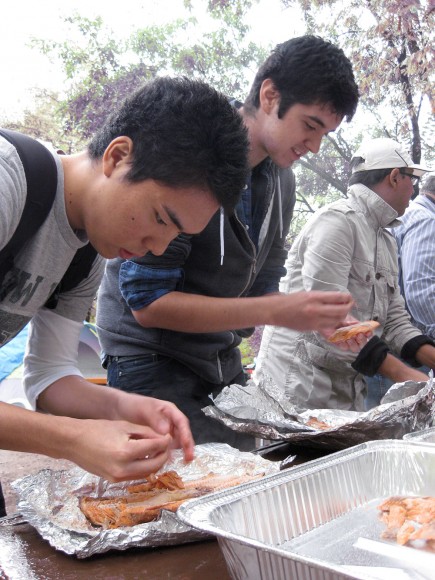 South Okanagan thundershowers failed to dampen spirits as international and Aboriginal students from UBC took part in the Okanagan Nation Alliance (ONA) Salmon Feast celebration, which was held in Okanagan Falls Sept. 17 to 19.

The cultural tour, organized by UBC Aboriginal Programs and Services, was a hit with students from Ontario to Bangladesh. The ONA fisheries department is credited for reintroducing the sockeye salmon back into the Okanagan River.

“This is so special. I really feel honoured to be part of this event,” said Gustavo Aguilar from Costa Rica while enjoying a heaping plate of food. “I had no idea of all the hard work the Nation has done to bring this salmon back. I feel lucky to be able to be here today.”

Upon the arrival of the students to Okanagan Falls Provincial Park, Osoyoos Indian Band Chief Clarence Louie immediately made students feel welcome and invited the group to come up, one by one, to the microphone and introduce themselves. Almost all of the students thanked the Okanagan Nation for being generous hosts.

The Salmon Feast could not have been a better fit for Ian Hobson of Queensland, Australia. The exchange student is taking classes at UBC for one term and touring some parks as part of his studies. He is fascinated by the role Aboriginal culture plays within B.C. park systems.

“It was just good hear the traditional talks and to see the traditional dancing. It was great to see how welcome they made us all feel,” said Hobson who returns to Australia over the Christmas break.

The feast consisted of sockeye salmon, salad, vegetables, baked potato, rice and dessert. At the end of the buffet table, participants had the option of taking a small piece of the special ceremonial salmon on hand. Students were encouraged to save all their salmon bones and place them in a bowl. Following the meal in a special ceremony, fish bones were returned to the river by elders as a way to show gratitude and bring the salmon back.

“The Salmon feast was a great experience. As an Okanagan Nation member, I was proud of the work the ONA has done to make this happen,” said the second-year UBC student. “I didn’t know there hadn’t been fishing in over 100 years and it was great our communities came together to celebrate.”

The sharing of culture was a two-way street on the tour. During the bus ride down to the South Okanagan, international students took turns singing songs from their homelands.

Last year, the Aboriginal Programs and Services Cultural Tour took international and Aboriginal students to the launch of the Salmon Feast Canoe Paddle and then on to the Nk’Mip Desert Cultural Centre within the Osoyoos Indian Band.