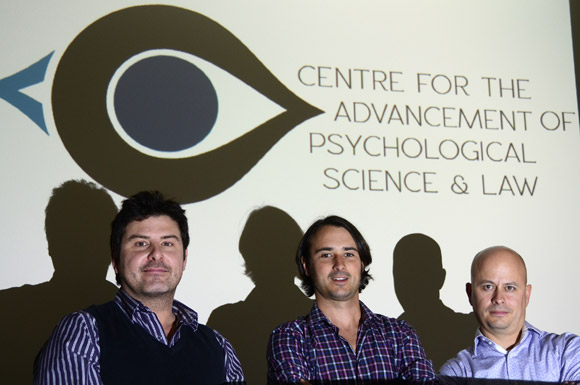 Stephen Porter, left, Mike Woodworth and Zach Walsh are the driving force behind CAPSL – the Centre for Advancement of Psychological Science and Law. The world-class centre will officially open Feb. 3.

Centre for Advancement of Psychological Science and Law opens Feb. 3

A world-class research centre is opening in the Okanagan next month and those interested in criminal behavior will be sure to take note.

It has been years in the making, but on Feb. 3 the Centre for Advancement of Psychological Science and Law (CAPSL) will officially open at the University of British Columbia’s Okanagan campus.

“Our ultimate end will be to facilitate a better understanding of crime,” says Walsh, adding the idea behind CAPSL is to facilitate the interface of psychology and the law. All three agree that a fundamental goal is to “provide world-class research on human behaviour in forensic contexts with both basic scientific and applied relevance.”

With the potential to be a nationally and internationally renowned centre for forensic psychological research, practice and training, the centre focuses on four key areas at the cross-section of psychology and law:

The types of research conducted at CAPSL, which is funded by the Canadian Foundation for Innovation (CFI) and the B.C. government, is relevant to the basic understanding of the psychology of crime and victimization, and to the types of biases that can influence decisions about suspects and defendants in the legal system, sometimes leading to wrongful convictions. This could help to improve the criminal justice system.

“There are not a lot of places you will see this many forensic psychology researchers working together in one lab,” says Walsh. At one time or another, all three scholars have worked with the police, Corrections Canada and even the FBI in the United States. According to Porter, they have also provided training to judges, parole officers, psychiatrists, investigators, lawyers, workers’ compensation boards and other agencies interested in using psychological research in their work. He says the research to be done at the centre will be of interest to such professional groups.

Porter’s current research is focused on psychopathy and victim selection, memory for crime, tunnel factors influencing tunnel vision in police interviews and the courtroom, human facial expressions, and the analysis of deceptive behaviour.

“We’re all doing quite diverse work,” says Porter. But the sum of the whole is stronger than the individual parts, and the combined knowledge of the three scholars and their graduate students makes the centre one of the top facilities in psychology and law on the planet.

Along with some of the brightest minds comes some of the biggest and best equipment to study human behaviour in the world. Porter said the centre used their award to finance more than $200,000 in state-of-the-art equipment to measure eye gaze during various tasks, and polygraph measures of physiological arousal such as heart rate and galvanic skin response. This infrastructure will provide opportunities to examine basic factors leading to criminal behaviour and psychopathy, how eyewitnesses process and recall crimes, and potentially how deceptive individuals involuntarily give themselves away.

Dr. Bob Hare, the world’s leading expert on psychopathy and one of the most renowned forensic psychologists, will be speaking at the opening of the CAPSL. While the opening ceremonies are by invitation only, the public is invited to attend Hare’s presentation and can also check out the centre. Hare will be speaking at 4 p.m. in the Arts and Sciences building lecture theatre 140.