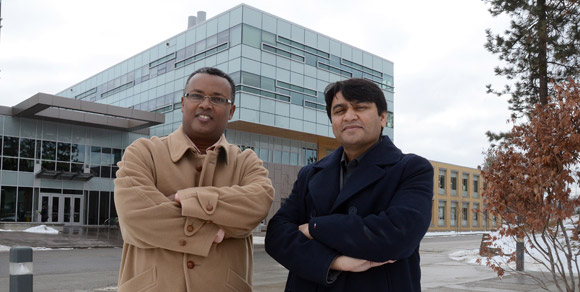 UBC School of Engineering professors Solomon Tesfamariam and Rehan Sadiq have developed a Decision Support Tool that has potential for managing municipal infrastructure such as water main networks.

A research project by the School of Engineering at UBC’s Okanagan campus could some day provide municipalities with a useful tool for managing water-supply networks and reduce risk of system failures.

The entire country is grappling with an infrastructure deficit of unprecedented proportion. With the majority of Canada’s urban infrastructure built in the 1950s, ‘60s and ‘70s, municipalities are finding themselves on the hook to finance costly replacement projects.

The City of Kelowna is taking a proactive approach in allowing UBC engineering researchers to develop models utilizing its water infrastructure, says Sadiq.

“We appreciate the opportunity to work with the City,” says Sadiq. “It is key to have visionary municipal partners for this research. The outcomes could determine future directions for infrastructure maintenance.”

The problem is compounded with cities in British Columbia exposed to earthquake hazard. The aging and deterioration will undermine the structural capacity of the pipes, and consequently, makes the systems susceptible to damage with small-magnitude earthquakes, says Tesfamariam.

“This type of damage has a ripple effect, as it undermines the post-disaster recovery, and also firefighting capability,” says Tesfamariam.

Sadiq and Tesfamariam, with two post-doctoral fellows and two grad students assigned to the project, have used the City’s existing geographic information system (GIS) and other water system data to create a Decision Support Tool (DST) that may help predict areas of risk for water-main failure.

The City of Kelowna has an existing capital replacement program, using a multiple bottom-line approach for developing strategies and priorities for replacement projects. Once developed, the DST should be a valuable tool to support decision making, says Joel Shaw, capital assets and investment manager of infrastructure planning for the City of Kelowna.

“The collaborative research with UBC has been beneficial to the City, as it brings a fresh set of eyes and additional expertise for condition assessment of the city’s water system,” says Shaw. “As our communities age, municipalities are facing significant challenges with respect to infrastructure replacement, and tools like the DST will help identify problem areas so that infrastructure can be replaced in a timely and cost-effective manner without reducing service levels.”

Sadiq and Tesfamariam are also working on developing an infrastructure tool for smaller municipalities to measure and predict the condition of their waterworks systems.

The proposal calls for innovative research to develop a tool that does not depend on existing systems or technology. The research team will utilize three PhD students, and a post-doctoral fellow.

“Depending on the type of the project, we could allocate resources accordingly,” says Sadiq.

Sadiq and Tesfamariam have worked as a research team for more than a decade, first with the National  Research Council’s Institute for Research in Construction in Ottawa, and then at UBC. Sadiq specializes in water quality modelling and asset management, while Tesfamariam is an expert in evaluating the structural integrity of water system infrastructure.