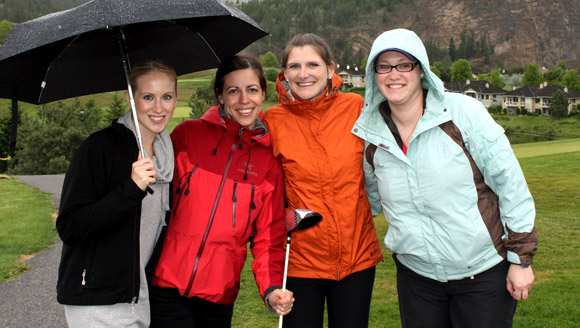 Being one of the most fun events of the year, the 6th Annual Faculty and Staff Hack and Whack Golf Tournament fulfilled its perennial mandate by generating plenty of laughter, good memories and participation.

For the second year in a row, the Pinnacle Golf Course at Gallagher’s Canyon Golf & Country Club provided great scenery and the ideal venue for the popular tourney. Student Events Coordinator Christy Mahlberg fielded more responses than there were available spots in the shotgun start.

“I had a significant number of people I had to turn away. There were others who heard we were filled up and did not try to register,” said Mahlberg.  “It filled up about a week before the deadline.”

The popular faculty and staff outing featured a best-ball format where emphasis is placed on participation rather than competition. The 16 teams, made up of four to five ‘golfers,’ advanced their balls up to the best shot from the group. This way, more experienced golfers can be relied upon to move their teams up the course.

Mother Nature did not fully cooperate as drizzle and an inconsistent breeze kept jackets on and umbrellas out. “I was surprised by what a good time everybody had,” said Mahlberg. “Even though the weather wasn’t the best, everybody had so many good things to say about the event.”

The support from on and off campus was strong for Hack and Whack. Those on campus donating prizes were Aboriginal Programs and Services, the Advising and Involvement Centre, Athletics and Recreation, Bookstore, Conferences and Accommodation, Development and Alumni Engagement, IT, Media and Classroom Services and player’s from the on-campus Koi Sushi restaurant.

Best Costume went to the ‘We Like “IT” in the Rough’ team of Vanessa Lomas, Jeff Myers, Shawn Turner and Nathen Storness-Bliss. Due to her tireless efforts, staff volunteer Renee Leboe took home the coveted Leanne Perry Spirit Award. Perry, a former Campus Life coordinator, is started Hack and Whack in 2007. Although being unavailable to participate this year, AVP Students Ian Cull was given a round of applause for hosting the event.

One of the most unusual aspects of the tournament took place on the ninth tee box. Participants selected either a regular marshmallow or a super sized marshmallow instead of a golf ball. This year’s Marshmallow Long Drive competition went to Peter Arthur, Director of the Centre for Teaching and Learning.

“I just had a good connection with the marshmallow. It just launched and went a long way. The hardest thing was to balance the large marshmallow on the tee. I asked one of my colleagues to hold it but they wouldn’t,” said a smiling Arthur who picks up swishy-drive bragging rights and an iPod Nano, courtesy of IT, Media and Classroom Services.

“I really like this event and wish we had more of them,” he added.

One response to “Drizzles, drivers and dimples at annual Hack and Whack golf tournament”