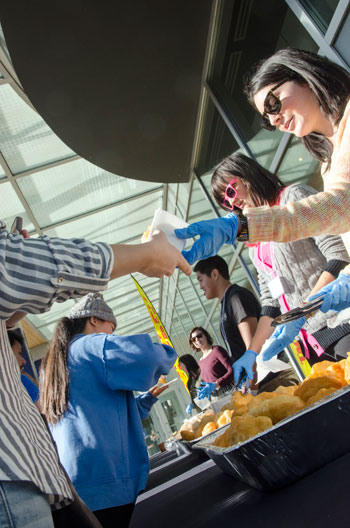 Hundreds of students and guests enjoyed bannock at a special ceremony Monday afternoon marking the centennial year of UBC, and the 10th anniversary of UBC Okanagan.

A historic educational partnership between the Okanagan Nation Alliance and UBC, first signed on the eve of UBC Okanagan’s opening in 2005, was renewed Monday afternoon.

The formal re-signing of a memorandum of understanding on educational cooperation and programming was the highlight of a ceremony that also marked UBC’s Centennial year and the 10th anniversary of UBC Okanagan.

The memorandum reflects mutual recognition of the importance of a long-term relationship between UBC Okanagan and the Indigenous people of the southern Interior. It also outlines UBC’s collaboration with the En’owkin Centre, the Okanagan Nation’s post-secondary institution in Penticton, BC, in teaching the Okanagan Nation’s history, culture, language, philosophy and knowledge at UBC.

“Ten short years after opening the doors, this campus has been transformed and much thanks for that goes to the warm welcome UBC received right here in the valley,” said UBC Interim President Martha Piper. “We were embraced so positively by early supporters and partners, and especially important for today’s ceremony we were welcomed by the Okanagan Nation.”

The memorandum of understanding constitutes UBC’s formal recommitment to this relationship and to the education of Aboriginal students, said Piper.

“Our commitment today is embodied in our Aboriginal Centre, dedicated to enriching the quality of the experience for Aboriginal students, by promoting access, providing capacity-building opportunities and celebrating success.”

“We have come a long way together, and we have a very strong working relationship with this campus,” said Westbank First Nation Chief Robert Louie, who signed the agreement on behalf of the Okanagan Nation Chiefs Executive Council. “We work together in cooperation and friendship to promote academic excellence for all of our students. It makes us proud to see the achievements and to know that the Okanagan Syilx people are part of that.”

“It is the strength of our partnerships with the Okanagan Nation Alliance and other governments, with industry, and with communities that has made this campus the true success story that it is,” said Deborah Buszard, UBC Deputy Vice-Chancellor and Principal of the Okanagan campus.

UBC’s Centennial will officially launch tomorrow, Sept. 30 – the 100th anniversary of UBC’s first classes in 1915 – with a ceremony at the UBC Vancouver campus. The event will be webcast live at 10 a.m. Wednesday at 100.ubc.ca/events/ubc-centennial-live-webcast. 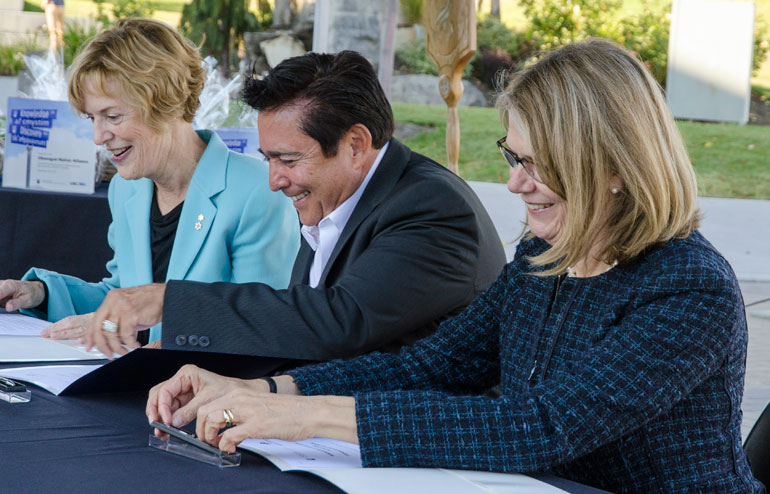