Chemistry professor investigates how plants and bacteria affect the environment 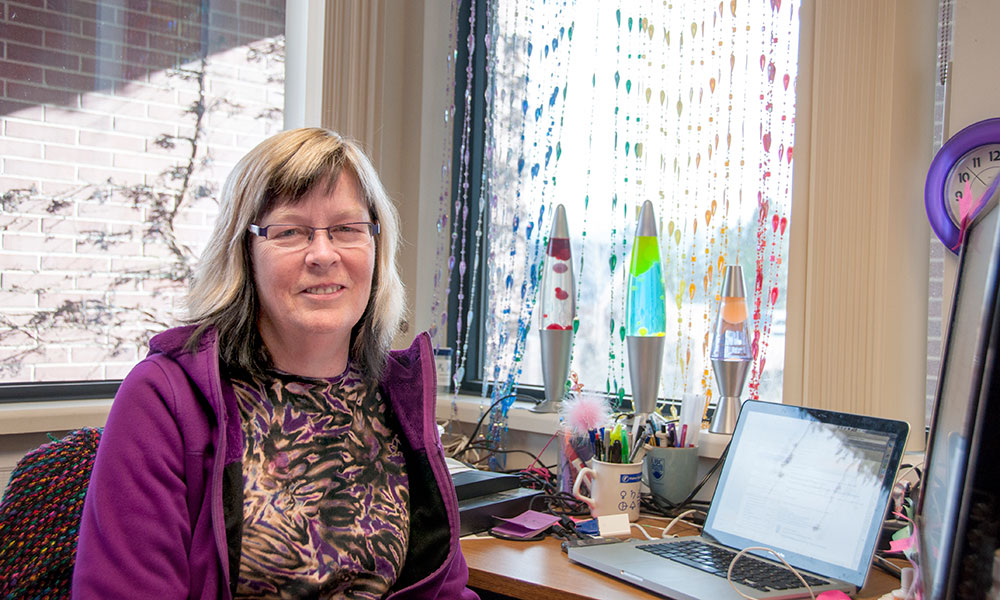 Bachelor of Science, University of Victoria (1979)

KAREN PERRY WATCHES as tiny orange peels fall confetti-like over students engrossed in an experiment that has clearly gone wrong.

Then, completely in character, the UBC Chemistry Associate Professor does what students would expect. She laughs.

“It was beautiful in a way and it smelled lovely,” Perry says. “Little bits of orange peel were everywhere but it wasn’t dangerous in any way.”

The mishap occurred during an advanced analytical lab in which students pair up to work on an experiment they choose and execute. The class is small; just 16 students working under the watchful eye of a professor who understands that the road to success is often paved with failure—and the occasional bit of citrus.

“I’m constantly putting out fires, so to speak, but it’s usually little things that go wrong and it emphasizes why we wear all that safety gear,” Perry says.

Of all the courses she’s taught, this is her favourite.

“This is not a cookbook lab,” she says. “Students have to come up with a problem, design the experiment, order their chemicals, make up their own solution and then write reports on what they’ve done.”

ADDING AN ENVIRONMENTAL ASPECT TO CHEMISTRY

Perry taught at the campus before it even became UBC Okanagan in 2005. Over that time she’s taught 20 courses, designed six, and created an environmental chemistry program that provides chemistry students with “a more diverse environmental” education.

The program, introduced in 2009, exposes students to the chemistry of natural systems as well as issues related to pollution and ecosystems. It includes a mix of courses from pure chemistry, to biology, and earth and environmental sciences.

Perry is interested in exploring how bacteria and their processes affect the environment and recently began studying cyanobacteria, an ancient group of bacteria that can produce harmful neurotoxins.

She’s researching how they fit into the ecosystem in different environments and plans to look at saline lakes in particular to see what species are there and what role they play in terms of nutrient cycling.

Starting in the fall of 2016, Perry will pursue studies at the Alfred Wegener Institute for Polar and Marine Research, researching bacteria that thrive in the cold Arctic Ocean.

She is thrilled to be able to take a year to focus on her research but will miss interacting with students at their events, in her office, and in her role as advisor to Environmental Chemistry and Chemistry students.

Student events aren’t the only place you can expect to find Perry. She is a staunch Kelowna Rockets hockey fan, loves the ballet, and is passionate about theatre, especially the Kelowna Actors Studio. In the summer you’ll find her grooming or riding her show horse Mocha Joe, or at a show-jumping competition.