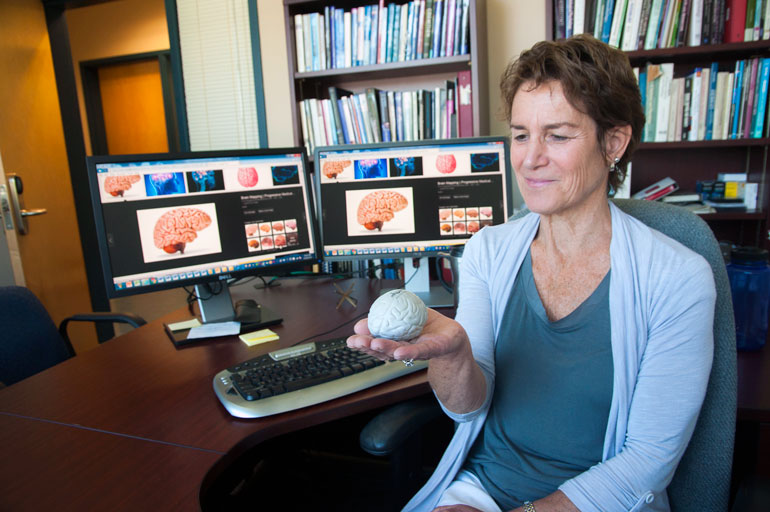 Barbara Rutherford has been examining research that compares how both sides of the brain work together. And when they don’t.

New research out of UBC suggests that the two halves of the brain are not always better than one.

In a recently published study in the journal Brain and Cognition, Psychology Professor Barbara Rutherford explains findings that seem to flip common sense on its head.

When a task is complex or difficult, it is better performed by both hemispheres than one alone, says Rutherford. Active interference disappears, and so does lopsided performance between the hemispheres. This suggests that the better hemisphere surrenders control in order to facilitate collaboration.

These behavioural findings line up with recent work in neuroimaging. Research shows that during complex tasks there is greater blood flow between the hemispheres in the frontal areas of the brain—those associated with problem solving—suggesting that these areas are collaborating.

At the same time, there is less blood flow between the hemispheres in more posterior areas—those that are specialized for a task—suggesting that these areas are segregating

Rutherford says this is new and vital information by showing that task complexity impacts how regions of the brain interact.

“Our research lines up by showing that collaboration happens at the same time as the surrendering of control by the better hemisphere,” says Rutherford. “The more we can understand how the two hemispheres and the regions of each hemisphere function and interact, the better we will be in designing therapies for people who are dealing with brain injuries or learning disabilities.”

Rutherford designed her study to tap into the different specializations of the hemispheres. While both hemispheres can perform language and spatial tasks, the left hemisphere is usually better at language tasks and the right better at spatial tasks.

Using groups of letters or non-letter shapes, subjects had to identify whether one of the group matched any of the others. Some tasks required a match to an identical shape; others required mental conversion to change a letter case or rotate a shape. Some tasks had only three items, and others had five.

Results indicate the left hemisphere is better at letter tasks, and the right is better at spatial tasks, but only when there were three items in a group. When there were five items, then lopsided performance between the hemispheres disappeared and there was a benefit of hemispheric interaction.

The next step in Rutherford’s research will move into mathematical problem solving, to make sense of how our brain functions when processing simple and complex mathematical equations.