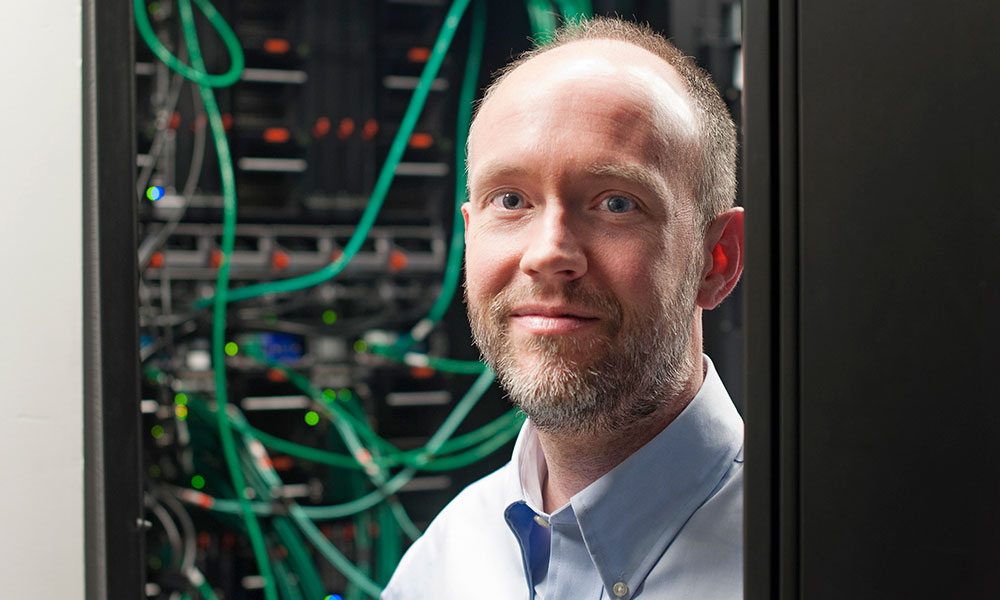 “I’m passionate about getting students to improve their thinking, and thereby make the world a better place.”

Quoting American philosopher Daniel Dennett, Ryder has come to respond with: “Philosophy is what you have to do until you figure out what questions you should have been asking in the first place.”

For the UBC Okanagan prof—whose research areas at include philosophy of mind, philosophy of cognitive science and metaphysics—he’s attempting to figure out what those questions are. And being a professor, according to Ryder, is the way to pursue the unknowns.

“I added philosophy because I loved it, but I was still aiming to become a doctor, or possibly a medical researcher,” he says.

“Eventually, I realized there was just one way to get what I wanted. It was only later that I discovered I also loved teaching.”

THINKERS OF THE PAST AND PRESENT

Looking back, researchers 25 years ago had no idea how to investigate the mystery of consciousness, but philosophers made progress in figuring out what questions to ask. Now consciousness is an exciting topic in the sciences, not just philosophy.

Having worked on consciousness in his career, Ryder’s main area of research over the past decade focuses on what philosophers call “Intentionality.”

“This is a topic that hasn’t yet opened up to the sciences, in part because we still don’t know what are the right questions to ask,” Ryder says.

“When we perceive and think, those perceptions and thoughts are of or about things outside of ourselves. Intentionality is this aboutness, this ability we have to represent things (real and imaginary), facts and falsehoods. It’s so pervasive in our experience—perhaps even essential to it—that it’s easy not to notice it.

“Another way to put the research question is, ‘How does the brain represent the world?

“I think the details of how our brains work are crucial to finding an answer to this question.”

In his quest to find the answer, Ryder has been using theoretical neuroscience (mostly computer modeling) with University of North Carolina neuroscientist Oleg Favorov on how brains learn.

“It turns out this work dovetails with the massive machine learning projects that Google is so keen on right now, such as deep learning and multi-view learning,” Ryder says.

The product of this research will be captured in the forthcoming book Models in the Brain: Naturalizing Human Intentionality.

While there may not be many really big mysteries left, Ryder argues that the human brain is definitely one of them.

“We have enormous amounts of data on the brain and behaviour, but we’re still largely in the dark about how perception, thinking and action really work at a basic mechanistic level,” he says. “What exactly is the cerebral cortex doing that allows us to live the remarkable lives that we do, creating art, science, and so much of value?

“It’s incredibly exciting to be part of a global interdisciplinary effort to penetrate this last great mystery. The challenge is immense, and it may be that we’re not up to it. But if we’re lucky, there will be a handful of theoretical insights that will crack the nut.”

Beyond research, Ryder continues to get excited about teaching.

“I love getting students to question their underlying assumptions, and open their minds to possibilities and even probabilities they never before imagined. But most importantly, I’m passionate about getting students to improve their thinking, and thereby make the world a better place.”

Ryder credits his wife, Zena Ryder, also a philosopher, for being an important mentor.

“I would be lost without our philosophical discussions that have now lasted nearly two decades.”