Learning from the past and present to prepare for the future 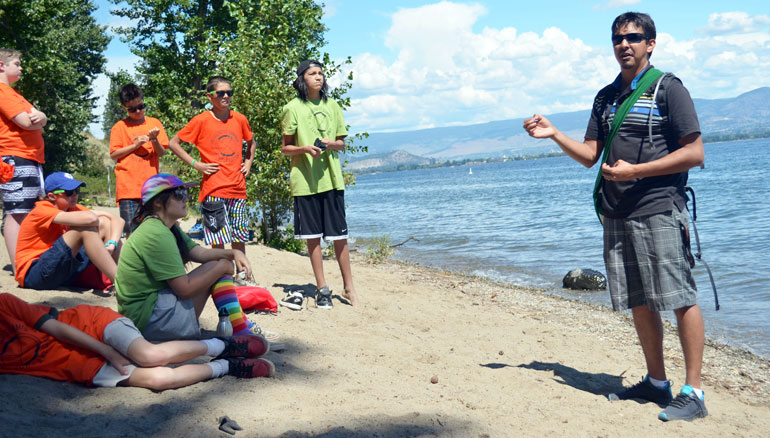 Westbank First Nation Curatorial Heritage Researcher Jordan Coble talks about the Okanagan Nation’s relationship to the land and how his ancestors used to cross Okanagan Lake near the current location of the WL Bennett Bridge.

What started out in 2012 as a weeklong day camp for 12-14 year-olds, has evolved into two youth camps with off-campus programming and on-campus accommodation for participants.

Using survey feedback from previous years, the camps were improved from a grassroots level.

Initial survey results showed students wanted more of a university experience, including staying on campus. By providing a housing option in the second year, the camp boundaries expanded beyond the North and Central Okanagan. This summer, the range that campers came from expanded significantly — from the Okanagan, Beaverdell and Merritt, to places outside the region such as Squamish, Burns Lake, Edmonton, Manitoba and Vancouver Island.

“The feedback was to expand and have an overlap between the two camps. This helped the older students practice their leadership and mentorship skills. And it helped us all get to know each other better,” said Fosbery who credits Jerowsky for her dedication and mentorship role. “The Leadership students were excited about planning the dinner and they spread themselves out to meet and help out the Scholar campers and their families.

“Some of the other feedback was that they wanted more free time. We built this in and trusted our leadership campers to embrace the opportunity with maturity. More free time can be scary with teenagers. But everyone respected the camp and respected each other’s roles. In this year’s feedback surveys, campers appreciated being trusted and treated like adults as they learned their leadership roles.”

Fosbery went on to say the camp was positive on other levels — like having Westbank First Nation (WFN) member Jordan Coble, a former UBC Aboriginal Access Studies student, return to talk about leadership within the Okanagan Nation.

Coble, the WFN Curatorial Heritage Researcher, led both groups on a tour of the land through Kalamoir Regional Park and told traditional stories from his people. “Fire becomes a guiding light for the spirit. Not only does it keep us warm, but it’s sacred to us. It is a medicine.”

The UBC alumni was candid about his journey through the teenage years. “I missed out a lot on things when I was young because I was too lazy. I didn’t go to (summer) camps because I wanted to sleep in.

“I missed out on a lot of opportunities. I tell you this because we have to learn from our past as we prepare for our future.”

Coble talked about how learning is a lifelong journey and shared how he is currently taking classes to learn his nation’s language – Nsyilxcen.

Leadership camper Kendra Sampson took a leap of faith to travel to the Okanagan.

“The workshops are fantastic. The active witnessing (workshop) showed me the difference between being passive, assertive and aggressive,” said the Siska Band member. “I thought I was always assertive, but I found out I have been more aggressive. I need to pull back a bit because if you come across as being aggressive it’s not respectful.

“I was impressed by how dedicated the students were. They really showed up to work. They were only there a few hours but a couple of them came close to completely painting one of our bathrooms by themselves,” said Terbasket. “They accomplished a lot in a short period of time.”

Desiree Wecoup from The Pas, Manitoba traveled the furthest distance to take part in the Leadership camp. “It was fun. I like being around different people and to get out of my comfort zone,” said the 17-year-old. “I liked helping out at the Friendship Centre and going out on the hike.

“I just wish it wasn’t ending so early. It really went by fast.”

Jerowsky was involved in all aspects of planning and coordinating the camps. The fourth year Science student was excited to be involved in planning the new leadership piece.

“When looking at programming for the Leadership Camp, we wanted to incorporate the importance of volunteering, being confident and looking at providing tools they could use throughout the week with the younger campers,” said Jerowsky who will start her second year as an Aboriginal Mentor next month. “When many students think of university, arts and sciences come to mind. We wanted to show them all the diversity offered here.” 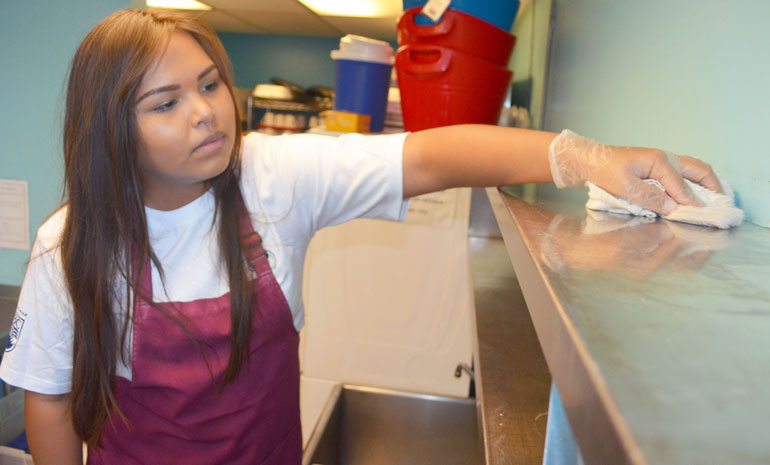 To promote community and volunteerism, camp organizers worked with the UBC Community Service Learning Program to help out off campus. Nanaimo’s Waverley Bob cleans up in the kitchen at the Ki-Low-Na Friendship Society.