Where the library is a social hub 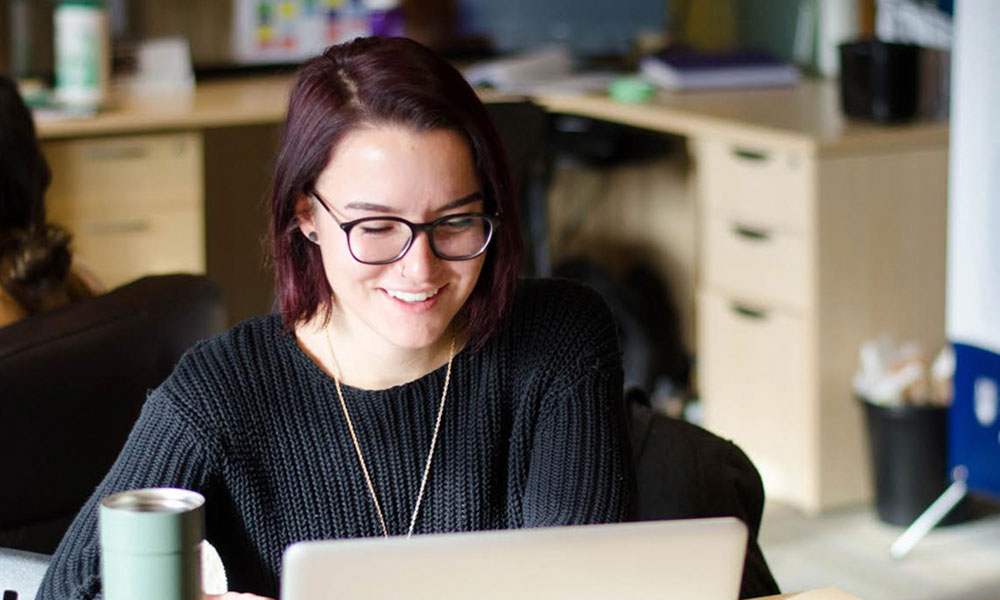 “I started to learn the difference between surface learning and really absorbing something and having it became part of me.”

UNIVERSITY STUDENTS ARE NOT CREATED EQUAL. That’s what makes each one special.

For example, some begin undergraduate studies with an academic plan carved in stone, while others come with an empty slate to be marked and reshaped multiple times over their university career.

Karleen Delaurier-Lyle was the latter. The wide-eyed teenager loved school but had no idea where it might lead.

“I remember feeling like there was so much I didn’t know,” she says. “People would ask me what I was majoring in and I’d have to admit I had no idea what a major or minor was.”

Delaurier-Lyle found herself drawn to Gender and Women’s Studies and Indigenous Studies—programs she could explore to learn what it meant to be an Anishinaabe woman and a feminist. The two complementary programs helped her see the world, and her place in it, quite differently.

“I started to learn the difference between surface learning and really absorbing something and having it become part of me.”

Delaurier-Lyle learned when to speak up against discrimination, and when to remain silent.

“I had to learn to say, ‘You are being really offensive right now and are actually hurting my feelings.’ Just saying that phrase was hard, but I’ve found a lot of strength in it.”

Delaurier-Lyle excelled in university, but found herself increasingly distracted by nagging questions about what she’d do after graduation. A career in education didn’t sit right; video production was out, as well (too many nights and weekends). But a career in library science was a distinct possibility.

She remembers discussing the idea with her sister, who reminded her how much she’d always loved libraries and librarians. In high school she’d spent countless hours studying in the library and chatting up the staff. She’d even gone so far as to job-shadow a librarian and accompany a UBC Okanagan librarian to a conference on indigenous knowledge and libraries during her first year.

Back then, she’d been inspired by the librarians she’d met at the conference but adverse to the idea of spending an additional two years earning her master’s degree. That was in her first year of university and before she realized how quickly time passes when you are passionate about your studies.

“The people I met at the conference were all such happy, positive people, excited about what they were doing and immersed in their communities,” she says. “One guy talked about how you have to treat your archives like they are alive and talk to them.”

Delaurier-Lyle was in her third year when she accepted a job in the Library and began grilling librarians about what drew them to the field: “Every single one of them said they loved their job.”

Delaurier-Lyle graduates from UBC Okanagan in Spring 2016 and has applied to the Library and Information Studies master’s program at UBC Vancouver. Eventually she’d like to work in indigenous communities where the library is a social hub and keeper of essential archival information.

“I’m so interested in how a library can help the indigenous community and communities in general. It’s an interesting space to figure out what the community needs.”

The library isn’t the only place Delaurier-Lyle feels welcome at UBC Okanagan. She was actively involved in the Aboriginal Programs and Services Centre, the Student Library Advisory Council, and the Sexual Assault and Rape Awareness group.

Delaurier-Lyle is looking forward to exploring life outside Kelowna but will always look back fondly on UBC Okanagan and the connections she’s made with students, staff, and profs she knows on a first-name basis.