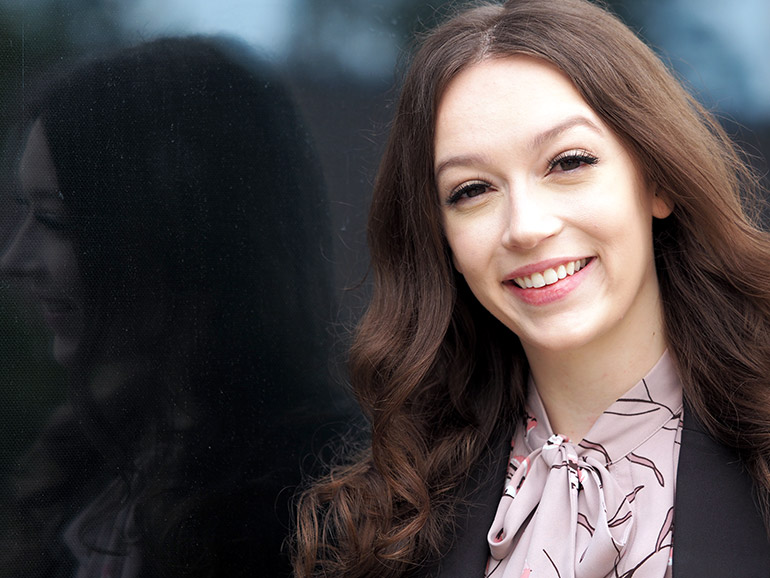 Teagan MacDougall reminds herself of one thing when the going gets tough—how worthwhile this will all be when she’s able to help sick children as a pediatrician.

Today, MacDougall graduates with a Bachelor of Science in microbiology (honours), celebrating not only the end of her undergraduate career, but also being awarded the Pushor Mitchell LLP Gold Medal Leadership Prize.

The $10,000 prize, now in its 11th year, is the highest honour available for an Irving K. Barber School of Arts and Sciences student and recognizes a graduating student who has excelled academically and shown leadership while earning their degree.

Andrew Brunton, managing partner at Pushor Mitchell LLP, says the firm is proud to recognize the accomplishments of another exceptional student at UBC Okanagan.

“We are happy to support Teagan and hope she continues to chase her dream of becoming a pediatrician and is able to continue her great work in the community,” says Brunton. “We are proud to be a supporter of UBC Okanagan and to be able to add Teagan to the distinguished list of Pushor Mitchell LLP Gold Medal Leadership Prize winners.”

MacDougall grew up a short drive from the UBC campus in Lake Country, BC. After graduating high school, she relocated to Whistler to spend her days on the slopes and evenings working in the hospitality industry—before returning to the Okanagan and enrolling at UBCO in 2016.

Having enjoyed biology in high school, and knowing her end-goal was medical school—microbiology was a natural choice.

Though thrilled to be back in the classroom—bad study habits started to haunt her. She struggled during her first semester, trying to learn weeks of course material for an upcoming midterm in one night.

“I was up all-night studying, drank six red bulls, and I got 20 per cent,” she says. “It made me wonder whether or not I was cut out for university—I asked myself what I wanted to do. I could either walk away or try harder and I decided to try harder.”

MacDougall registered for a summer physics course—this time committing to give it her all.

She did just that—and completed the course with 97 per cent. From that moment forward, she never received a grade lower than an A.

Aside from academic achievements, MacDougall was deeply involved in research during her time at UBCO, volunteering in a biomedical research lab, and working as an undergraduate research assistant.

“The smile on their faces when they see a princess or superhero walk into the room—it’s so heartwarming,” says MacDougall.

“We do crafts, read books and just talk and keep them company—but, honestly, they’re the real heroes. They overcome huge adversities at a young age and still come out smiling—they’re so brave and inspire me to be resilient every day.”

Aside from pediatrics visits, MacDougall is also a volunteer at Kelowna General Hospital, doing patient visitations and providing information in the emergency department. She also serves as a youth mental health ambassador with the Kelty Mental Health Resource Centre at BC Children’s Hospital, a position that piqued her interest for personal reasons.

“During my teenage years, I suffered from an eating disorder,” she explains. “Although it was horrible—I try to think of it as a silver lining. That experience helps me to better understand and empathize with youth suffering from similar disorders.”

Over the next few months, MacDougall will work with the early detection research group at the BC Cancer Agency—while studying to take the Medical College Admissions Test (MCAT) this fall.

Though her medical school of choice is UBC’s Southern Medical Program on the Okanagan campus, MacDougall says she’s open to the idea of relocating if necessary.

“Wherever my journey takes me, the financial flexibility that comes with winning this award will allow me to further my education and continue growing my foundation with the goal of helping as many people as possible,” she says, thanking Pushor Mitchell and her professors for their support.

As she graduates today, she shares one final lesson not learned in a textbook.

“Hard work does pay off and I want my fellow students to know they are capable of much more than they know. No one should sell themselves short. Anything worth having is worth working for—it’s so simple, yet so true.”