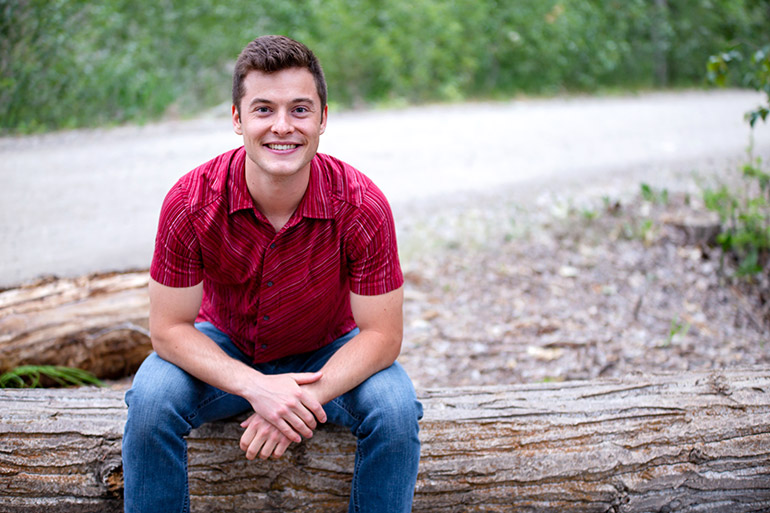 Although Aidan O’Callahan describes himself as a planner — a critical thinker who likes to get his ducks in a row before committing to anything — it’s almost a fluke he ended up at UBC Okanagan.

With American and Canadian parents, O’Callahan was finishing high school in a small town in Connecticut when he began investigating which university to attend. His mother had one request — just apply to a single school in Canada, for fun. He started an online search looking for something unique where he could feel at home, but also where he could explore his full potential.

“It really is a coincidence I ended up at UBC Okanagan,” O’Callahan says. “I was applying to American schools in cities like Boston and New York. When I looked up schools in Canada I found UBCO. I came to visit the Okanagan campus with my dad and I thought ‘wow, this is pretty unique. This is the place for me.’”

Part of UBCO’s appeal, he says, is the close-knit campus and how easy it is to make connections with students and professors from every faculty.

While a student in the Irving K. Barber Faculty of Arts and Social Sciences, O’Callahan found it easy to learn across faculties as he was curious about many things. It was his curiosity and confidence that led the psychology student to reach out to Dr. Charlotte Jones, an associate professor with the Faculty of Medicine.

“I have always been interested in thinking critically, especially as it relates to policies in health care, politics, and social services,” he says. “Because I like to understand an issue from multiple perspectives, I became passionate about Indigenous-led projects in health care and multidisciplinary work within the health care system. I started learning more about Dr. Jones’ interesting research and reached out to her.”

O’Callahan’s curiosity led to the Faculty of Medicine Summer Student Research Program and then a separate position with a UBC Multidisciplinary Undergraduate Research Project in Health Scholarship. He completed this research with the help of Dr. Jones and School of Nursing Associate Professor Dr. Donna Kurtz. This in turn led him to Prince George and Kamloops where he worked with several communities to co-develop an Indigenous-led culturally safe telehealth service for people living with diabetes and obesity.

Laying that foundation led to three years of research, including opportunities at BC Children’s Hospital Research Institute, UBC’s Faculty of Medicine and Yale University. While conducting this research, he also managed to earn top grades in his studies.

Last week, O’Callahan graduated with a Bachelor of Arts, Honours in Psychology and a Minor in Indigenous Studies. Along with his degree, he was also presented the 2021 Lieutenant Governor’s Medal.

The Lieutenant Governor’s medal program recognizes students who excel in their studies while making outstanding contributions in inclusion, democracy and/or reconciliation on campus or in their communities.

It was his academic standing, combined with his kindness, empathy, and leadership skills, that prompted Dr. Jones to nominate him for the Lieutenant Governor’s Medal.

“I have been impressed by Aidan’s academic achievements — completing an honours degree and getting an almost perfect GPA — while conducting research,” says Dr. Jones. “His knowledge of Indigenous peoples and their health and wellness, his work ethic, his determination, and his ability to flourish in cross-cultural relations has demonstrated his gentle but effective leadership style.”

When asked about his academic accomplishments, O’Callahan quickly changes the subject.

“I don’t really like to talk about my grades. I recognize they are important and you don’t get great grades just from talent. It has been a lot of hard work,” he admits. “However, I also recognize I’ve come from a privileged position. There is no way I would have accomplished my grades or my volunteer experience if I was hungry most days. Too many university and college students go hungry and it has been shown that this decreases concentration, motivation and overall well-being. Sure, I’ve faced barriers, but there has always been food on the table and people in the background supporting me.”

Even though he has graduated, student food insecurity still concerns O’Callahan. He is hopeful UBCO student advocates can work with local government and the university to ensure fewer students are food insecure every year.

With five years of university behind him, O’Callahan currently works with BrainTrust Canada helping clients with brain injuries who have previously been incarcerated. He’s taking an academic break before making his next move. For a planner, he sees the irony in not knowing what is next. He is keeping his doors open, knowing he has knocked on the right ones, and plans to eventually apply to UBC’s Faculty of Medicine.

“I love living in the Okanagan and it is such an honour to work and volunteer with the Syilx people,” he says. “I know that the next decision I make will determine my life direction and I am very excited for what the future holds.”