Explore the highlights at UBC Okanagan in 2022 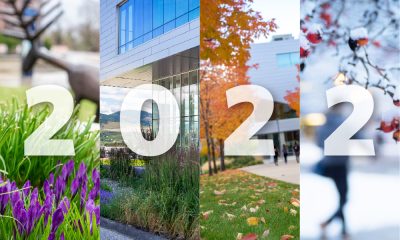 The year is coming to a close and we have so many memories to look back on here at UBC Okanagan. From the return of in-person learning, to the announcement of a major downtown development, to the first on-campus graduation ceremonies since 2019—our community has a lot to be proud of.

Before we kick off 2023, let’s look back on some of the highlights of the past year at UBCO.

On April 21, the Faculty of Medicine celebrated the 10th anniversary of the Southern Medical Program (SMP) at UBCO. Opened in 2011, the SMP has graduated more than 215 doctors, helping to improve health care for patients and families in B.C. It’s also one of four sites within UBC’s broader distributed medical education program, which is training the next generation of medical students and resident doctors around the province.

In May, UBCO’s Skeena Residence officially received Passive House certification—a stringent set of efficient design and construction standards—making it the first student residence in Canada to receive that status. The building requires only one-third the amount of energy of a typical residence building and is an integral part of UBC Okanagan’s recently announced Climate Action Plan.

In February, UBC Okanagan’s Emergency First Responder Team (EFRT) saved a student’s life. When Murray Forbes, 77, started his studies at UBCO, he frequently mentioned that being surrounded by young people was one of the greatest perks of being a mature student. Little did he know, it would be a group of young people—UBC Okanagan students—who would one day save his life. He was found unconscious and had suffered a massive heart attack, but was luckily aided by student members of the EFRT just in time. The students were honoured with a letter of commendation by UBCO’s Principal and Deputy Vice-Chancellor Lesley Cormack in the spring.

UBCO celebrates the graduates of 2022

On June 9 and 10, UBCO conferred more than 2,400 degrees in six different graduation ceremonies—making this the largest group of graduates in the campus’s history. The last time graduating students crossed the stage in person was in 2019, with both the 2020 and 2021 ceremonies held virtually. Many of the students who received their undergraduate degrees this year have spent more than two years learning online and through remote lectures, labs and exams— a testament to their dedication and perseverance.

In June, a new mural in the Lower Mission area of Kelowna was unveiled— the latest project by students in a UBC Okanagan fourth-year visual arts course. Instructor David Doody and co-facilitator Jorden Doody supervised and guided the students through the steps of planning, pitching and painting a public mural. This is the third year the course has been offered at the Okanagan campus and David says that he can see how much impact and excitement a large painting like this can bring to a community.

After living on the outskirts of the city for more than 16 years, UBC Okanagan revealed plans this summer to open its doors in a new location immersed in the heart of the city. Given the rapid growth of the campus since 2005—which has now surpassed projected enrolment targets—the time is right to expand. The project, known as UBCO Downtown, plans to function as a collaborative, multi-use space in the heart of downtown Kelowna.

During the first week of September, we welcomed 3,330 new students to campus. This was the largest-ever incoming cohort of students at UBCO—a remarkable number considering that, when the campus first opened its doors 17 years ago, the entire student population was roughly equal to this year’s incoming cohort.

The B.A.R.K Program celebrated its 10th anniversary at UBCO this year, having fostered a community full of joy for students, volunteers and handlers alike. The program started modestly in 2012 with 12 dogs and has grown significantly. Now, B.A.R.K. has more than 60 in-house handler and dog teams—all UBCO volunteers—and reaches thousands of students each year. In addition to providing comfort to students, more than 15 peer-reviewed research papers have been published based on the program.

UBC powers FORWARD to drive decades of discovery and solutions

This September, UBC announced the most ambitious campaign ever via a simulcast event held on the Vancouver and Okanagan campuses. FORWARD, the campaign for UBC, will raise $3 billion to benefit students and researchers across both campuses, and activate the power of global alumni by doubling alumni engagement.

Early November saw UBC Okanagan’s campus filled with students, now alumni, who graduated and were celebrated with a virtual ceremony during the first two years of the COVID-19 pandemic. More than 600 alumni returned to campus to take part in a special ceremony. The event recognized the accomplishments of those who didn’t have the chance to experience that iconic opportunity of crossing the stage to receive their degree at a live graduation. This unique occasion was the first time UBC Okanagan has hosted a fall graduation ceremony.

And that’s a wrap! It has been such an eventful 12 months and, with even more to look forward to in the coming year, we cannot wait to see what 2023 holds in store for us here at UBC Okanagan. Have a wonderful New Year!