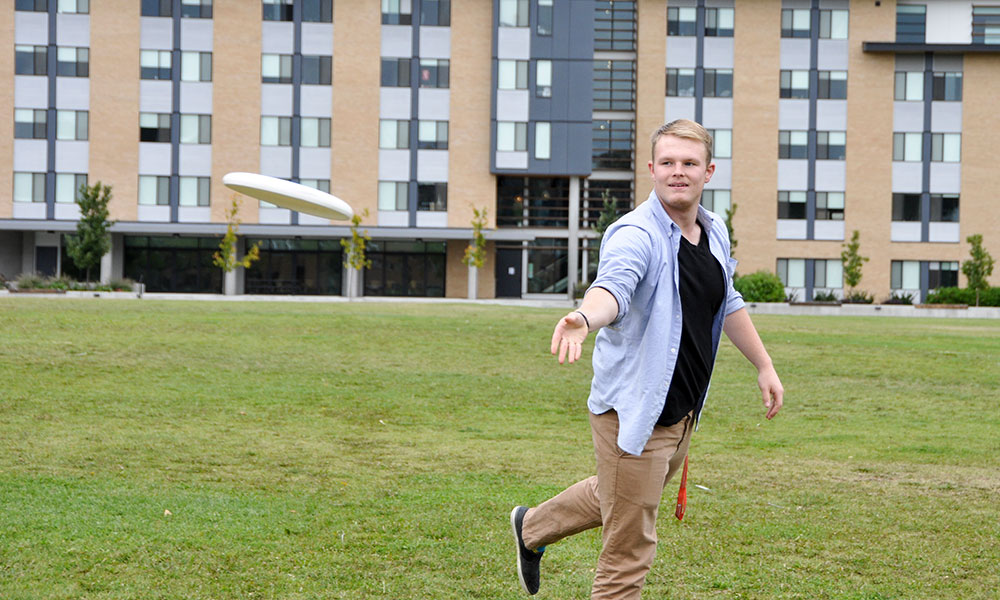 “I would love to be on the other side giving back to an institution that has given so much to me.”

COURSEWORK ISN’T THE ONLY PATH UBC students can take to make life-changing discoveries.

Lyndon Duncan is a prime example. The fourth-year Political Science student at UBC’s Okanagan campus says immersing himself in campus life helped transform him from “shy and sheepish” to “confident and outspoken.”

“I’m much more confident and willing to assert myself and share my opinions and take the lead when I need to,” says Duncan, who is News Editor at The Phoenix student newspaper. “I’m developing life skills and professional skills.”

Working as a resident advisor in UBC Student Housing and Hospitality for the past three years has been a particularly transformative experience that aided Duncan in learning how to communicate, delegate, supervise, and mediate. It has also promoted his ability to remain calm in high-stress situations.

“As a resident advisor I’ve had to deal with every crisis you could imagine and found that I’m really good in high-pressure situations,” he says.

Duncan says being involved in campus life boosted his ability to do well academically.

“I think it’s important to have other things going on so that when you get stuck you can leave and come back to it,” he says. “It’s like moving your tires in the mud before you have blocks in place. Having time away gives you time to get your blocks in place.”

Duncan’s original plan was to earn his Bachelor of Arts degree and then become a teacher, but he’s rethinking his options and considering a career in post-secondary administration.

“I’m really passionate about education and teaching people but I’m not sure that being a high-school teacher is the way I’m most interested in teaching people,” he says.

“Working at a university is really appealing to me because I’m interested in helping people grow within an academic environment. I would love to be on the other side giving back to an institution that has given so much to me.”

Duncan says there is no doubt he has benefitted from a smaller campus where there are simply more opportunities to excel and feel part of a community.

He recently walked into a class of 30 and the professor knew everyone by name—a common occurrence at UBC Okanagan, he says.

“When I submit a paper, I’m not a number that one of eight teaching assistants is marking. My prof has eyes on my paper and that’s not something students attending a large institution can say.”